Lives in Bellingham with his wife Linnea.
Has 1 daughter Stephanie and son in law Rob
2 sons Tim  and Patrick and 1 grandson Mason
​ 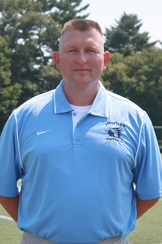 Brian graduated from Medfield High School in 1985 and attended Plymouth State College in New Hampshire.  Brian is currently employed at United Parcel Service in Ashland, MA.  He lives in Medfield with his wife Kymberli and their two boys Liam and Declan.  Brian’s hobbies include reading books about football and strength and conditioning, playing guitar, watching college and New England Patriots football, and keeping up with his boys.

Greatest memory of high school football: being able to play for and coach the Medfield Warriors.